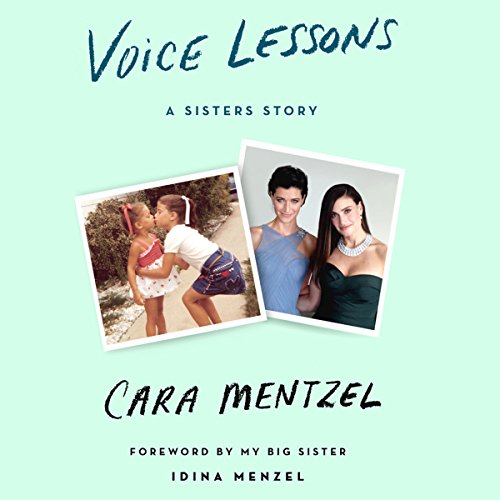 This program is read by Cara Mentzel, with a foreword from her big sister, Idina Menzel. Also included is a bonus interview and an exclusive duet of the sisters performing the song “Never Never Land”. Voice Lessons is the story of one younger sister growing up in the shadow of a larger-than-life older sister – looking up to her, wondering how they were alike and how they were different, and ultimately learning how to live her own life and speak in her own voice on her own terms. As Cara Mentzel studied, explored, married, gave birth (twice), and eventually became an elementary school teacher, she watched her sister, Idina Menzel, from the wings and gives listeners a front row seat to the opening nights of Rent and Wicked, a seat at the Tonys, and a place on the red carpet when her sister taught millions more, as the voice of Queen Elsa in the animated musical Frozen, to “Let It Go”. Voice Lessons is the story of sisters – sisters with pigtails, sisters with boyfriends and broken hearts, sisters as mothers and aunts, sisters as teachers and ice queens, sisters as allies and confidantes. As Cara puts it, “My big sister is Tony Award-winning, gravity-defying, ‘Let It Go’-singing Idina Menzel, who has received top billing on Broadway marquees, who has performed for Barbra Streisand and President Obama, at the Super Bowl and at the Academy Awards. The world knows her as Idina Menzel, but I call her Dee.” Voice Lessons is their story.
LISTEN FOR FREE ON AUDIBLE

Listen to the audiobook The Swamp by Eric Bolling. Just like the audiobook above, it’s available to listen to for free via Audible

Try the audiobook The Sweetest Burn by Jeaniene Frost for free. Listen to your first book for free the first 30 days.

Give the audiobook The Switch by Joseph Finder a listen. It might be the perfect listen for you.