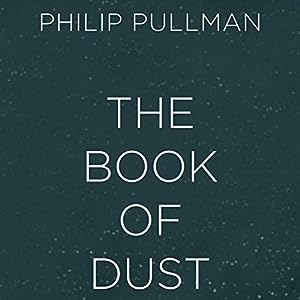 The Book of Dust by Philip Pullman

The much-anticipated new work from the author of The Golden Compass is coming at last! Renowned storyteller Philip Pullman returns to the parallel world of Lyra Belacqua and His Dark Materials for a thrilling and epic adventure in which daemons, alethiometers, and the Magisterium all play parts. The Book of Dust will be a work in three parts, like His Dark Materials (The Golden Compass, The Subtle Knife, The Amber Spyglass). The title and cover of this first story will remain under wraps until a later date, but it can be revealed that the book is set 10 years before The Golden Compass and centers on the much-loved character Lyra and her daemon, Pantalaimon. Philip Pullman offers these tantalizing details: “I’ve always wanted to tell the story of how Lyra came to be living at Jordan College, and in thinking about it, I discovered a long story that began when she was a baby and will end when she’s grown up. This volume and the next will cover two parts of Lyra’s life: starting at the beginning of her story and returning to her 20 years later. As for the third and final part, my lips are sealed. “So, second: Is it a prequel? Is it a sequel? It’s neither. In fact, The Book of Dust is…an equel. It doesn’t stand before or after His Dark Materials but beside it. It’s a different story, but there are settings that readers of His Dark Materials will recognize, and characters they’ve met before. Also, of course, there are some characters who are new to us, including an ordinary boy (a boy we have glimpsed in an earlier part of Lyra’s story, if we were paying attention) who, with Lyra, is caught up in a terrifying adventure that takes him into a new world. “Third: why return to Lyra’s world? Dust. Questions about that mysterious and troubling substance were already causing strife 10 years before His Dark Materials, and at the center of The Book of Dust is the struggle between a despotic and totalitarian organization that wants to stifle speculation and inquiry and those who believe thought and speech should be free. The idea of Dust suffused His Dark Materials. Little by little, through that story, the idea of what Dust was became clearer and clearer, but I always wanted to return to it and discover more.” The books of the His Dark Materials trilogy were showered with praise, and the Cincinnati Enquirer proclaimed, “Pullman has created the last great fantasy masterpiece of the 20th century”. With The Book of Dust, Philip Pullman embarks on an equally grand adventure, sure to be hailed as the first great fantasy masterpiece of the 21st century.

Listen to the audiobook Beautiful Tempest by Johanna Lindsey. Just like the audiobook above, it’s available to listen to for free via Audible

Because God Is Real Audiobook

Try the audiobook Because God Is Real by Peter J. Kreeft for free. Listen to your first book for free the first 30 days.

Because of Him Audiobook

Give the audiobook Because of Him by Terri E. Laine a listen. It might be the perfect listen for you.