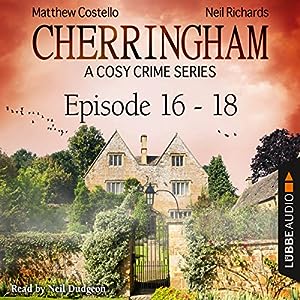 Jack’s a retired ex-cop from New York, seeking the simple life in Cherringham. Sarah’s a Web designer who’s moved back to the village find herself. But their lives are anything but quiet as the two team up to solve Cherringham’s criminal mysteries. This compilation contains episodes 16 – 18:

The Last Puzzle:
When amiable old village eccentric Quentin Andrews dies, the good folk of Cherringham are astonished at the crowd that turns up to his funeral. But even more astonished are the beneficiaries of his will: Quentin has left a veritable fortune to whomever is the first who can solve an intricate ‘Cherringham crossword’. That puzzle is only the first of many that Jack and Sarah will uncover as they follow the treasure hunt for clues and learn the truth about who Quentin Andrews really was. And the biggest mystery of them all… was he – in fact – murdered?

Final Cut:
When a big movie production comes to Cherringham, complete with lords, ladies, and flashing swords, the whole village is abuzz with excitement. But when a series of dangerous accidents threatens the life of the young lead, Zoe Harding, Sarah and Jack get involved. Are these really accidents? Or could they be something more sinister – even deadly? Who is trying to destroy the career of the beautiful young star – and why?

The Vanishing Tourist:
When an American tourist goes missing in Cherringham, the local police don’t see reason for concern – people often wander away from such tours. But when that tourist’s sister shows up from New York, desperately looking for answers, Jack and Sarah become convinced there’s more to the disappearance than meets the eye. Soon, they are entangled in a mystery with a secret history of betrayal, sacrifice, dishonour… and death.

Set in the sleepy English village of Cherringham, the detective series brings together an unlikely sleuthing duo: English web designer Sarah and American ex-cop Jack. Thrilling and deadly – but with a spot of tea – it’s like Rosamunde Pilcher meets Inspector Barnaby. Each of the self-contained episodes is a quick listen for the morning commute, while waiting for the doctor, or when curling up with a hot cuppa.For fans of Agatha Christie’s “Miss Marple series”, Lilian Jackson Braun’s “The Cat Who series”, Caroline Graham’s “Midsomer Murders”, and the American TV series “Murder She Wrote”, starring Angela Lansbury.

Co-authors Neil Richards (based in the UK) and Matthew Costello (based in the US), have been writing together since the mid 90’s, creating content and working on projects for the BBC, Disney Channel, Sony, ABC, Eidos, and Nintendo to name but a few. Their transatlantic collaboration has underpinned scores of TV drama scripts, computer games, radio shows, and – most recently – the successful crime fiction series Cherringham. The narrator of the audiobook, Neil Dudgeon, has been in many British television programmes including the roles of “DCI John Barnaby” in “Midsomer Murders” and “Jim Riley” in “The Life of Riley”.

Listen to the audiobook Night School by Lee Child. Just like the audiobook above, it’s available to listen to for free via Audible

Try the audiobook Nightblade’s Vengeance by Ryan Kirk for free. Listen to your first book for free the first 30 days.

Give the audiobook Nighthawk by Clive Cussler a listen. It might be the perfect listen for you.