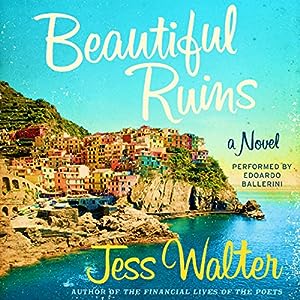 Audie Award Nominee, Fiction and Best Solo Narration, 2013The story begins in 1962. On a rocky patch of the sun-drenched Italian coastline, a young innkeeper, chest-deep in daydreams, looks out over the incandescent waters of the Ligurian Sea and spies an apparition: a tall, thin woman, a vision in white, approaching him on a boat. She is an actress, he soon learns, an American starlet, and she is dying. And the story begins again today, half a world away, when an elderly Italian man shows up on a movie studio’s back lot – searching for the mysterious woman he last saw at his hotel decades earlier. What unfolds is a dazzling, yet deeply human, roller coaster of a novel, spanning 50 years and nearly as many lives. From the lavish set of Cleopatra to the shabby revelry of the Edinburgh Fringe Festival, Walter introduces us to the tangled lives of a dozen unforgettable characters: the starstruck Italian innkeeper and his long-lost love; the heroically preserved producer who once brought them together and his idealistic young assistant; the army veteran turned fledgling novelist, and the rakish Richard Burton himself, whose appetites set the whole story in motion – along with the husbands and wives, lovers and dreamers, superstars and losers, who populate their world in the decades that follow. Gloriously inventive, constantly surprising, Beautiful Ruins is a story of flawed yet fascinating people, navigating the rocky shores of their lives while clinging to their improbable dreams.

Try the audiobook Men on Strike by Helen Smith, PhD for free. Listen to your first book for free the first 30 days.

Give the audiobook Men Without Women by Haruki Murakami a listen. It might be the perfect listen for you.